California Heats Up with Tom Quell 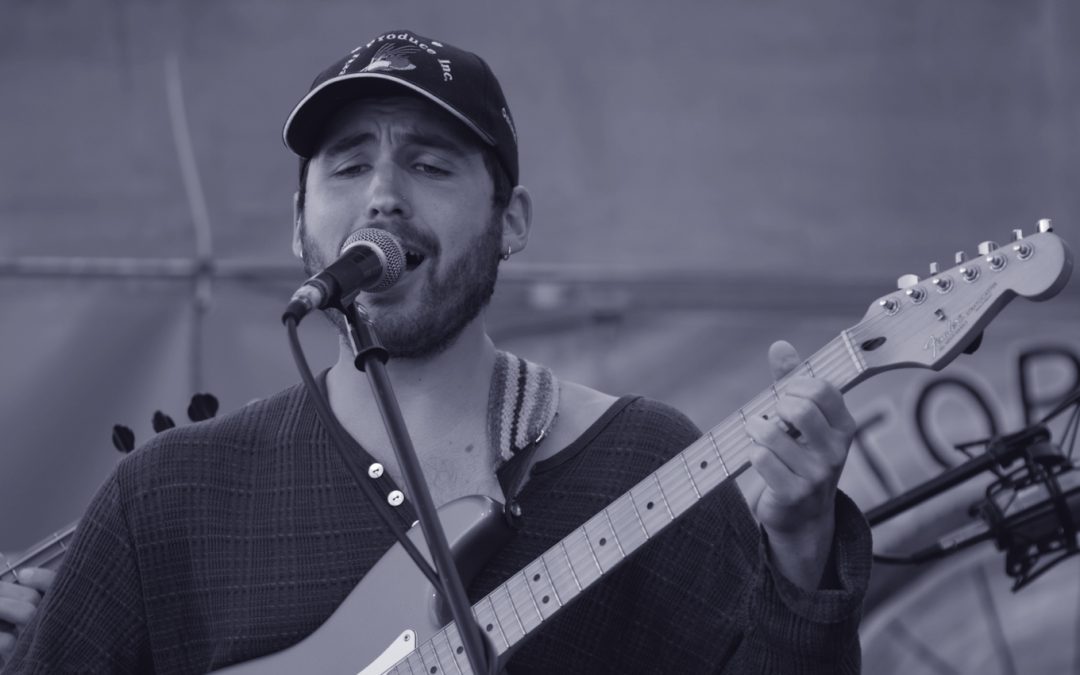 I caught up with singer/songwriter Tom Quell from the East Bay area after filming the Earth Day concert for Local Music Channel. Tom’s “dreamy-pop” sound combined with his lush voice reveals his 20-something life experiences of love, heartbreak and what it’s like to suffer incredible heat while touring on a bicycle with the Biketopia Music Collective.

LMC: Tell me where you’re from and what brought you back to the Bay Area?

Tom: I’m from 20 miles north of Seattle, WA in a town called Mukilteo. I went to UC Berkeley from 2012-2016 and studied English. After graduation I did some travelling– I was in South America, Spain and Paris. I also spent some time at home living with my parents.

Between 2016 and 2018 I was exploring and trying to figure out my life. What brought me back to the Bay was that one of my friends who I went to Berkeley with, was part of the Biketopia crew and he told me about the bike tour. He hit me up about it in May 2018. “Hey, we’re going to embark on this tour next month”. And I was like, I want to do that, it sounds amazing. He said they needed more riders, so I ended up joining the tour and I got to know everyone else. Went on this long tour and I had a musical explosion.

I wrote a bunch of songs and got used to performing a lot and saw the power of collaboration. The tour ended and we were in the Bay again. This was last summer August 2018. I was back in the Bay and it felt right to be here so I stayed. I started recording a few months after I returned. I had never recorded anything before so that’s when the process started for the album.

LMC: Tell me about the album? When is it coming out, details?

Tom: There’s so much frustrating bureaucracy with copyrighting and stuff, so it will be out this summer [June 14]. There are 11 songs on the album and I’m going to release it all at once. It’s called “Marrow” as in bone marrow. I’ve always wanted to have something to show to venues and people.

LMC: Who are your musical heroes, and do you take any inspiration from them and put in your songs?

Tom: Yes, for sure. I do take inspiration from lots of people, lots of artists, consciously and subconsciously. I would say, the Beatles, Stevie Wonder, Sam Cooke. Soul and pop music and the whole spectrum of that kind of genre is something that I really like . Even present day I went through a big Justin Beiber phase. I still have lots of respect for Justin Beiber and love his voice. I think he’s got a beautiful voice.

LMC: The music scene in the Bay area is great, there’s lots of diversity. Are there any local artists that you think are cool that you work with and may feed off each other?

Tom: I just moved back to the Bay less than a year ago, so I’m not quite plugged in as I should be. But in terms of local musicians, there’s definitely the groups that are part of the Biketopia Music Collective. Bicicletas Por La Paz is one I definitely connect with. There’s a mutual support that goes on between us. Mijiliani, Heather Normandale, and Salami Rose Joe Lewis. She’s an Oakland artist that’s coming up right now. I had a celebration of album completion show back in April, and she played a set there. She’s really special.

LMC: Let’s talk about your music. It has a light pop sound to it. What kind of people do you see listening to your music and who is it written for?

Tom: That’s a great question. I would say “Dreamy soul pop”. That’s kind of the “genre” that I’ve come to call it. It’s not totally accurate, but it has elements of a few different things that are accurate. In terms of who I’d like to listen to it?

It’s not written for anyone, definitely not. The songs that come out of me and I don’t have so much control or agency of who they appeal to, because at the end of the day it’s just something that kind of comes out of me. I think if I were trying to think too hard about who it’s for, then it would come out inauthentically.

But I do think, definitely people my age, people in their mid 20s, I think there probably will be some degree of (laughs) middle-school girl fans if they heard it.

LMC: When you are writing your songs what are you channeling? Where does it come from?

Tom: I can’t really write a song that’s not true about what’s going on with me at the time. A lot of my songs are love songs because I’ve experienced a lot of love and heartbreak and a lot of my songs. Heat-Induced Lethargy was written on the bike tour when I was not feeling heartbroken, and my mind was in a more free and easy space. That was totally a true song about how I was feeling, but it was so simple and didn’t have the heaviness that some of the other songs have.

Tom: It was. Do you know about the bike tour?

Tom: We were in Eugene, OR and we were playing this bar. It’s an outdoor bar, cool setting but it was so hot and nobody was interested in the music at all. That happened a few times over the tour that people just cared less about the music and we were a bit frustrated cause we set up a whole sound system, and were performing and there were people drinking beer and not coming over and engaging and pretending like we weren’t there.

So there’s this combination of “I’m tired of this” cause we’ve been playing shows and they don’t care, and it’s so hot I can’t even move and there’s not enough shade. So that was the setting for that one. It was making light of a jokingly miserable situation.

Tom: That song was the chords first. Like “Heat- Induced Lethargy”, what started that song was (sings) HEAT-INDUCED LETHARGY. That was it. That was the words and the melody whereas “Fervor” I had all the chords first, I was in the zone and the chords seemed like it had to happen. It took me a few days to come up with a melody. Then trying to find lyrics that fit the melody.

With “Fervor” it was more like this feels right and these words seem to fit together and I found meaning in the lyrics after it was complete. That often happens with me. I write what feels right and then upon listening back to it I have an interpretation.

It’s about love and the first two lines “Shall we come to peace and walk down the good line, is it time to leave our dark wildly sad sides”. It’s about being in a relationship with someone and being your own demise of your relationship. You get to a point where making a big deal out of things and being over-sensitive and forgetting that the person that you are with is also just another human being. You perceive them as so special in your eye you kind of tap into your dark side a little bit and see the worst in things. So that’s kind of our dark wildly sad sides.

LMC: Do you plan to go on tour?

Tom: I do. That’s a good question and one that I need to ask myself more seriously too. I would like to go on tour definitely. I don’t know if that’s the kind of lifestyle I want to have ultimately. I think in general I love the Bay and I love the scene in the Bay and want to be in a place that feels like home where I have community and collaborators. I’m plugged into the network.

LMC: Tell me about the Bay Area music scene. What’s so special about it?

I think the East Bay music scene is surprisingly small world. Since I’ve been back here, it seems like every couple weeks I meet a talented musician who knows someone who I know, or some strange connection where it seems like the web is already interwoven, but I’m like finding out about these junctions in the web as I go. But it’s almost as though the web has already been spun and it’s just a matter of finding out about it for myself. It feels very small. Art in general and in music, it seems like a small scene which is really nice. It’s nice to know people support one another.

LMC: Do the people in the community go out and support the live music scene?

Tom: Yes, they definitely do. I’m realizing a lot of the people I spend my time around are musicians, so I guess I have a bias because I’m always hanging out with people who are interested in it and all about it.

But, I certainly do think there is huge support for the music scene. In general, it’s hard to know the struggle of the musician life in the Bay because if you are not one, it’s so expensive and it requires a lot of work and individual promotion and working for yourself.

I would say those who aren’t musicians don’t have an acute understanding of that. It doesn’t mean that they are not supportive. I feel a huge support from pretty much everyone.

LMC: Are you able to make your living making music?

Tom: I’m not right now. I would like to. I haven’t been playing many shows, because in the recent months I’ve been focused on the recording aspect of things and trying to get the album done. Once it’s done, I’m hoping the album can help me to play more shows, which is the main way a musician can make a living these days. I want to be excited about playing shows because I don’t want it to turn into something where shows are a means to a financial end, cause that’s where all the luster fades and things start getting really wrong and backwards.

I do substitute teaching in the Berkeley Unified School District, I do nude modeling for figure drawing classes, and I do Spanish interpreting. I’ve got various gigs that keep me on my feet.

LMC: Each of those things are very different.

Tom Quell plays live around the San Francisco Bay Area. You can check him out at www.tomquell.com